Well hello to all. Remember me? My name is Br. Casey and I used to write a blog here. It’s been nearly two months since I posted a video or blog post, and, let’s be honest, almost four months since I’ve posted an actual reflection. Quite a hiatus if you ask me.

But not without good reason! Man, it’s been a crazy few months, and not without a lot of work for future Breaking in the Habit works!

Br. Jay Woods, OFM, getting a closeup with the wide angle lens

Church Alive. My internship officially ended way back on May 26 when I went on a road trip throughout the east coast filming a documentary series with two of my fellow student friars. In the back of our minds were the negative things we hear about the Church on the news and from the outside—”No one goes to church anymore,” “the Church is in decline,” “faith is not relevant today,”—with a goal of finding the other part of the story. We knew, of course, that these statements each had some truth to them, but we also knew that the some churches are full, that in some places the Church was growing, that faith was what got some people by, that the Church was very much alive.

For 25 days—yes, nearly a month—the three of us traveled from city to city unsure of what we’d find. Sure, we had a plan. Sure, I contacted people ahead of time. But you know that nothing ever goes according to plan! You know that there were surprises at each stop! The trip was exciting, tiring, stressful, encouraging, and altogether difficult, and I’m happy I did it. If all goes well, you might see the fruit of it late this fall.

Vacation. After what seemed like a never-ending sprint of work since Christmas, I was so thankful to take a little over a week off at the end of June to see my family and to just relax. Outside of posting the final “A Friar Life” video and a phone interview, I did nothing of consequence. And it was fantastic. Yard and card games, beer, movies, and a lot of sleeping in.

The pilgrimage consisted of men from the OFMs, Conventuals, and Capuchins, all preparing for solemn vows

Solemn Vow Retreat. Which was good, because I needed all the stored up energy I could get! Starting with the first transatlantic flight of my life (watched three whole movies and took a nap!) and ending five weeks later with twenty hours of traveling in one day, I had an AMAZING trip to Europe for my solemn vow retreat. Here are just a few of the highlights:

Rome. The trip started with a chaotic and exciting three days in the ancient city, hitting as many of the landmarks as we could in such a short time. It was in the 90s, public transportation went on strike our second day, and we were all jet-lagged. But man did it all just blow my mind. I mean, there were structures in that city that are 7-8 times older than my country. Everywhere you looked, it seemed, there was an ancient monument, a gorgeous Church, a historical artifact. The city is so old and so filled with amazing sights that the Church they call Chiesa Nuova, literally “New Church,” is nearly 450 years old. And seriously. St. Peter’s is bigger than you think. You see it in pictures and you hear that it’s really big. No, you just can’t fathom how big it is until you are in the square, walking around the altar, or standing on the roof of the Franciscan curia next door (year, we knew a guy…) We only got to spend a few hours there, but if I had seen only this in Rome, the trip would have been worth it.

Rieti Valley. After the craziness of the first few days in the city you could say that the “true” pilgrimage began with our trip to the Rieti Valley. Surrounded by mountain ranges, this valley is the first place that St. Francis went to preach and is home to some of the most significant Franciscan events. We went to Greccio, the place of the first ever nativity scene (organized by St. Francis); saw the places where St. Francis prayed and wrote some of his most famous writings; walked around the earliest houses in the order; and even saw a tau cross on a little chapel painted by St. Francis himself. While not as exciting as Rome and not as powerful as our next stop, it was a great introduction to Franciscan history and warmed us up for what we were about to encounter. 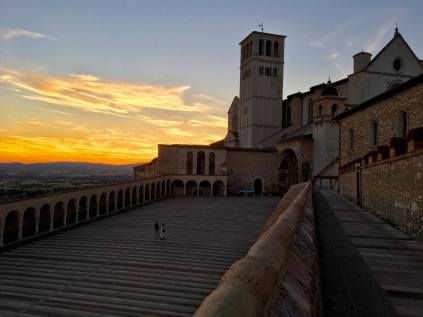 The Basilica of St. Francis

Assisi. What can I really say about Assisi that others haven’t already said? Truly, there is something special about the city. From the ancient wall on the top of the mountain that was partially destroyed by the rising lower classes (something that St. Francis would have probably took part in as a 15-year-old), to the baptismal font where Francis and Clare were both baptized as children, to the basilicas that honor their lives and hold their remains 800 years later, everything about the city was just immensely powerful. While I struggled at first to deal with all of the other people flooding to the city trying to capture some of its power (and a million selfies in supposedly quiet and holy places…) I think it was the very fact that there were so many people there that eventually touched me the most. What we were visiting were not just old buildings, dead stones on top of dead stones, we were making a pilgrimage to be a part of a living faith. Yes, many people came to take pictures and most obviously couldn’t read the signs that said “quiet” written in three languages in every holy sight, but there was something powerful drawing them there. They may have expressed their reverence differently than I did, but they were not there for the same reason that people go to art museums. At least not most of them. I remember sitting at the tomb of St. Francis down in the tiny crypt of the basilica and marveling at the literally hundreds of people that walked through every few minutes. It was a constant stream of people, so thick you could barely walk at times, lighting candles, touching the altar, kneeling, stopping for prayer, and gazing on with amazement.

And yet, the most amazing place to me in the whole city was a place that few people actually visited: San Damiano church. About a 15 minute walk down the hill (and so difficult to get back from) still stands the original church where St. Francis stayed after his conversion (officially becoming an oblate of the Church before starting his order), and where St. Clare lived for the majority of her life. To someone looking for something big and extraordinary, something classy or fancy, this is not it. The church might hold fifty people if they packed in, there is little-to-no artwork on the walls, and never a busload of tourists waiting to take a picture. It’s just a little chapel of stone off the beaten track. And it was so amazingly peaceful and grounding to be there. This is where the charism began. This is where the Poor Clares began. Incredible to sit and pray there.

The mountain top at La Verna

La Verna. Even in Assisi all good things must come to an end, and after two weeks of touring and sweating nonstop (oh, yeah, it was 95 degrees each day with no AC), we made it for our final stop for an intensive retreat: Mount La Verna. Located a few hours north of Assisi in Tuscany, La Verna is the place where St. Francis received the stigmata. If San Damiano was an incredible place to pray, I have no works for La Verna. It was cool, only in the 70s during the day and down to the 50s at night, surrounded by trees and filled with walking trails up the mountain, and basically just one big place of meditation. Each day I found a new rock, new overlook, new trail to stop and pray, to contemplate the beauty of nature, to imagine what it must have been like to be St. Francis walking around these deserted trees. I sat at one place, what I now call “epiphany rock,” for almost an hour each day and found myself thinking more clearly and tackling bigger issues than I ever have in my life. I found peace, was challenged, and felt at home with God and self in that place. It was a fantastic place to do a retreat and end our pilgrimage.

If there is ever a time to take a selfie, this is it

Vacation. As you’ll remember, I only took “a little over a week” of vacation back in June, meaning that I still had a week left to take. Yeah, I took in in Europe. I mean, c’mon! How many times am I going to get to Europe in my life with absolutely no responsibilities? You bet I was going to save my vacation money and travel around a bit. Starting in a small hotel in Florence, I spent three nights with the friars in Venice, stopped for 6 hours in Innsbruck, Austria to climb to the top of the Alps on my train north, and then three days with the friars in Munich, Germany. My quick synopsis of each: Venice was chaotic and dirty and yet a must-see with gorgeous views everywhere you look, Innsbruck might have been the best part of the whole trip (including Assisi) and going to the top of the Alps was definitely the coolest thing I have ever done in my life, and basically all I did in Munich (and this is not an exaggeration) was eat sausage and drink beer. So, yeah, that’s a vacation I won’t forget!

To Chicago, and beyond! I’m running out of breath here (more like my fingers are getting tired!) but there’s one last thing to mention. After a twenty-hour day of travel in which I jumped six time zones, I took one day of relaxation and packing in Durham before renting a car and driving out to Chicago over two days. I’ve spent that last two organizing my room, setting up doctor’s appointments, preparing for school in a few weeks, and, wait for it…

setting up a permanent film studio in the basement.

This post is already too long for me to get into what that means, but let’s just say that Breaking in the Habit will be making some big steps forward this year. If you haven’t already followed me on Facebook, Twitter, or now Instagram, I suggest you do so now. Besides the large album of photos that will be posted tomorrow only on Facebook, the efforts of Breaking in the Habit are expanding and diversifying, and you’re going to want to catch every announcement coming over the next three weeks! There’s even one that’s so big I’m not sure if I’m allowed to announce it yet…

Until then, thanks for all of your prayers, and I’m happy to be back to work! Peace and good to all!