With the journey moving quicker than I expected and spending more time with the friars and less time on the road than last year’s trip, I decided not to post everyday like last year. As much as I love sharing, why take time away from the friars to go write an essay? Crazy talk.

The worship space is very intimate, perfect for a college community.

That said, we’ve seen a lot since we left Macon. Our first stop was just an hour and a half north in Athens, GA, where the friars are the Catholic chaplains at the University of Georgia. This is quite a ministry. When I was in college, I spent a lot of time with the Catholic group on campus, and was really happy by the time I graduated to see the group grow to about 25-30 regulars, a mass with about 100, and a few events on campus each week. The University of Georgia is just slightly larger. With more than 35,000 students, the campus has four Catholic masses on Sunday in it’s own church (we had to share ours with other groups), a Catholic student center complete with library, dining room, offices, and lounging areas, a paid staff that runs the programming and finances of the ministry, and two full-time friars. Add this to a beautiful campus, quaint downtown city, and excellent weather and you’ve got yourself a friar that would love to minister here! 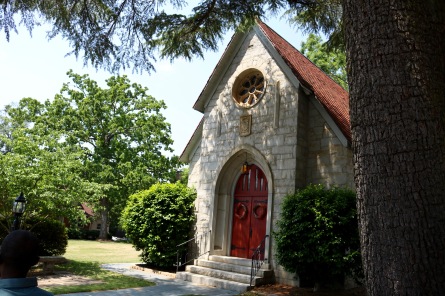 The original church building of St. Andrew’s parish in Clemson

After a quick visit here, it was off to South Carolina on Wednesday. In the morning, we stopped by the campus of Clemson University (the second of three campus ministries on our tour) where we met one of our friars for lunch and a tour. Relatively new to the friars, Clemson University and its Catholic presence there has a lot of history, changing shape and hands many times. Officially a parish with a student center (unlike UGA that is a student center with parishioners), it has a different feel for sure, with more focus on the larger community around it rather than just the students. There is still a lot going on for the students and the friars have made an effort in just a few years to get involved on campus not just at the Catholic Center but also reaching out to the administration, professors, and other organizations to offer a Catholic presence in a relatively non-Catholic area. For me, there was a lot of potential for growth here, and I’m excited to see what the friars do now that they’ve been established there for five years. 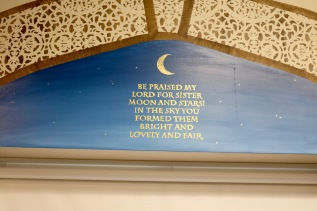 Even the windows had a Franciscan spirit!

With places to be and people to see, we left campus late in the afternoon for our next stop, Anderson, SC. Originally a mission to African-American Catholics in South Carolina, the parish was founded by the friars back in the forties and has remained a steady mission for us, despite changing its focus a few times. Today, the parish is roughly 40% white, 40% Hispanic, and 10% black, giving it great diversity and a lot of different needs. The friars were great to show us around and give us a little insight into the challenges and joys of running the parish, allowing us to ask questions ourselves.

The whirlwind tour ended as all good days should: dinner with the brothers. With friars from Anderson and Clemson getting together every Wednesday, we lucked out on a great dinner and exceptional conversation, laughing around the table for more than an hour. It was a great way to get to know the friars outside of their ministerial capacities and to just be brothers with them.

More pictures are up on Facebook if you want to check them out! Check back tomorrow for a look at our stop in Greenville, SC, and see if it stacked up to the other places!