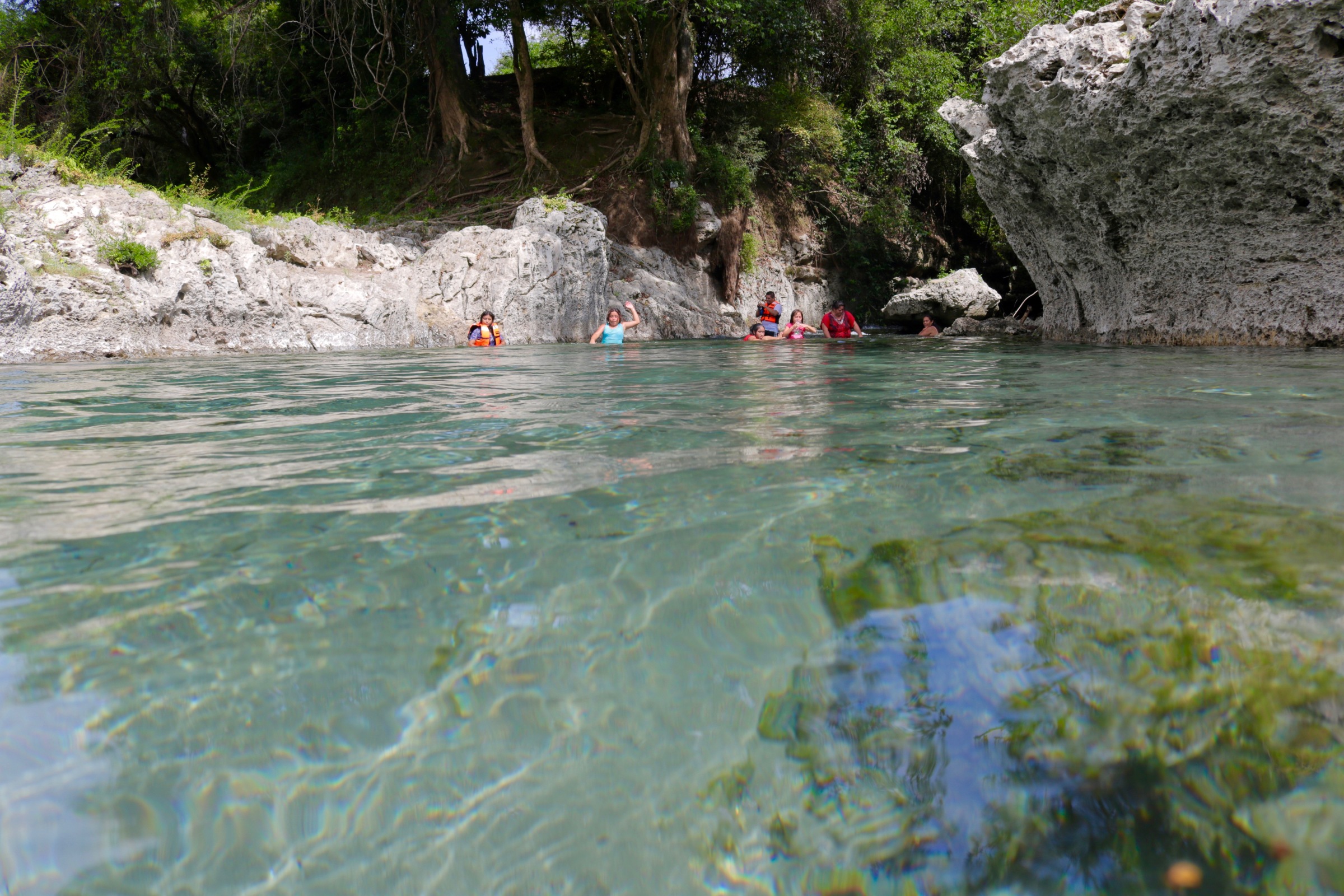 After nearly two weeks of being here in Mexico, there are a lot of things that I want to share. Difficult things. Moving things. Heart-breaking things.

For right now, though, I don’t want to do any of that.

Lest all my posts give the impression that my experience is nothing but struggles or political statements about immigration, I present to you the adventure of a day off that was yesterday.

Being that neither Christian nor I speak Spanish very well, leaving the compound and venturing into the city is an adventure in itself. Ordering food, taking a taxi, or finding our way around the small town almost always has some hiccup in the form of a miscommunication.

You can imagine, then, how confident we felt as we left yesterday to find the “place where people swim” in the river. We knew the name of the place and roughly how to get there… and so we just went. (This, I would like to point out, is not something I would ever do on my own.) We took a small taxi into the town (about 5 minutes), found the place where the “bus” (a glorified van) took people out into the country, told them where we wanted to go and started our journey. Twenty minutes later, we found ourselves at a restaurant and park overlooking the river. 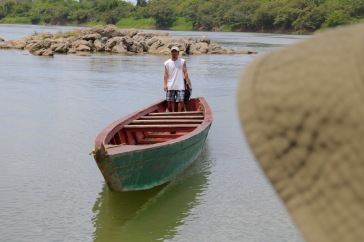 Great success? Not yet. As we looked into the river, there were a few boats, but no swimmers. There really wasn’t a shore or grassy area to get in the water, and frankly, the river looked disgusting. Do people actually swim here? Surely, if they did, there would be people swimming at 11:00am on a Saturday. Despite having ten or so people in the park area, we knew we had missed something. The existence of towels and coolers told us that we weren’t far off though.

Being that it was just before lunch and we had no idea what we were doing, we decided to stop in the restaurant to grab a bite to eat and ask for directions. “Do people swim here?” No. “Oh, where do they swim?” Santa Margherita. “Where’s that?” You need to take a boat north for 20 minutes.

Shoot. A boat? In our broken Spanish, we talked to a guy who said he could take us and that it would cost 400 pesos (only about $22, but relatively expensive given that lunch for the two of us was around 150 pesos.) “Uh, no thanks,” we told him. When we had first arrived, and once while we were eating lunch, we saw a larger boat taking 10-15 people up north, so we figured we would wait for that instead of commissioning a private, small boat. All we had to do was wait for that boat to come back south, which seemed to be on a 30 minute schedule.

Yeah… it wasn’t. An hour-and-a-half later, still sitting at the dock with our feed in the water and sunburn developing on our arms, we had to ask the question both of us had been thinking but neither wanted to ask: “So… what should we do?” Feeling that we had made a big mistake, and dreading the embarrassment of having to go back to the compound and tell the volunteers that we had somehow misheard their directions and never actually found a place to swim, we prayed, threw a 50 cent piece into the river, and hoped for a miracle.

At the top of the hill, a car arrived. People. People with a cooler. And towels. And a little girl in a bathing suit and life jacket. We must be in the right place… right? Mustering our strength, we sheepishly walked up to these Spanish-speaking strangers, hoping that they could point two dumb Americans in the right place. As we approached, we both laughed. “Isn’t that the volunteer from Doctor’s Without Borders from La Setenta Dos?” To our great surprise, and relief, she recognized us before we even opened our mouths. What. A. Blessing. There with her family, the explained that you could either wait for the big boat or commission a smaller one and that it was 400 pesos, not each, but for the whole boat. With 8 of us, that was not only a lot cheaper, but also a lot more reassuring that we would get to the right place. (Knowing that the place we wanted was called Santa Margherita is great, but having people who actually know what it is and how to get there is a little better!) 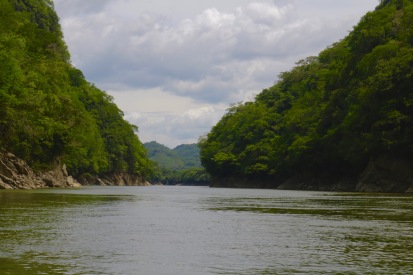 We were out in the middle of nowhere

I tell you, the boat ride would have been worth the full 400 pesos each had we known what we were doing. Traveling up an undeveloped part of the country, it was like we had entered the Amazon: trees lined either side of the bank as far as we could see, mountains and shear canyon faces surrounded the trees, and there was not a single sign of human life for the whole twenty minute ride. Half expecting to see piranhas jump into our boat, we were out there. And it was incredibly beautiful and so peaceful. With our new friends, we were motoring up a vast river into uncharted lands without only the slightest idea as to where we were going. We knew that we were going the right direction… but where would that ultimately lead us?

At first, it was pretty underwhelming and a bit confusing. We pulled up against a rocky, kind of dirty bank and were told that this was it. There were little lagoon cutouts into the land, and so we figured that’s why people came here: it was shallower, had no current, and might be cut off from wildlife. But it was still pretty dirty…

We walked, and we walked, and we walked. Maybe 200 yards along this thin strip of land past lagoons we walked, personally unimpressed. And then we saw it. Up ahead there was a freshwater spring shooting out of the rocks into an enclosed canyon. The water was clear. There were people jumping from the rocks into the surprisingly deep water, games being played, and people sitting on the edge drinking. When we jumped in, we realized that, not only was the water clean, it was cold. We’re talking ocean temperature before summer hits. It was an amazing. Hidden behind the murky river, surrounded by countless miles of untouched and inhospitable land, there was an incredible, mildly-civilized oasis to find refreshment. Christian and I spent about three hours there, the time away from the Casa an oasis in itself. For a few hours, our body temperatures lowered, our focus on those with such desperate situations all around us faded, and we were able to just relax on a beautiful day.

How we ever ended up in this beautiful place, having left with the faintest ideas of a plan, I have no idea. But it was wonderful.

[For more pictures, check out my Facebook page at: www.facebook.com/BrCaseyOFM.

← Been There, Done That
A Home For All →