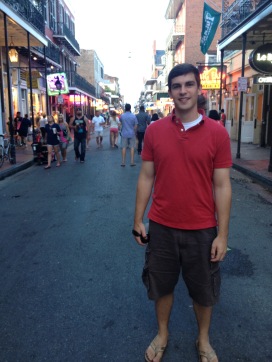 Bourbon Street was fun for sure, just not my type of fun!

Of all that we’ve seen so far on our travels, our trip yesterday stands out as the most unlike the rest. The scenery, friary, and city all presented an enormous contrast to the previous four places. Sadly, I can’t say that all of these were for the better.

On the trip itself, we saw two things we had yet to see in three days of travel: water and traffic. With the exception of about 2 minutes of drizzle while driving in Texas, we had seen absolutely no water, in any form, on our trip. No rivers, lakes, storm clouds, or oceans. That was drastically different as we drove through Houston and Louisiana. There was water everywhere. Every ten minutes, it seemed, we passed a lake or marsh, crossed a bridge, or found a flooded field. Twice we crossed bridges that took more than twenty minutes to cross over what I can only assume was alligator-infested swamps. Three times the water even came from above, pouring down rain and lightning, unfortunately slowing us down.

But that wasn’t the only thing that slowed us down. For the first time in four days, we actually saw enough cars in one place to have traffic. It was strange, actually. Having just driven 1000 miles through desolate places with no one around, it was almost jarring to see cars around us, billboards on the highway, and frankly, signs of civilization more than once an hour. To see houses, stores, entertainment, and civil structures seemed so foreign after what we had just seen.

And maybe that biased our perception a little bit, wishing we were back on the open road, but when we got to New Orleans we didn’t like what we saw. To say that the city was dirty is an understatement. I knew that Bourbon Street had more to it than what tv networks are allowed to show during football games, but I had no idea it was so disgusting. The bars looked fun and the street performers were excellent (saw a guy slide 10 feet on his head), but I couldn’t get over the fact that there was a strip club on every block, often not very discrete, and the clientele walking the street that had no problem going without “proper” clothing, vomiting, or smoking… “cigarettes.” Oh, and the smell. Without even a drink, I almost became like others before me, vomiting on Bourbon Street. 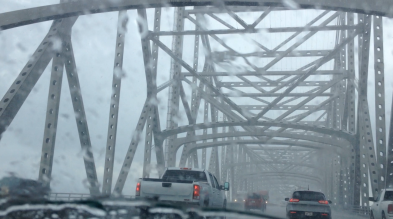 Despite crossing the Mississippi by bridge, we still got quite wet!

Obviously, though, that was not the entire city. So I don’t get angry emails telling me that Bourbon Street doesn’t represent the whole city, we did see other parts as well. There were some very cool parts, don’t get me wrong. We saw some of the historic places, heard some great jazz music, walked past some upscale restaurants near the water. Overall, I think, we felt its charm. It is definitely a historic city with a lot of night life, and I can see why it has great appeal.

But the fact of the matter is, despite its iconic images and history, the majority of New Orleans is in need of serious help. For a city that already had a lot of poor people, Hurricane Katrina had a lasting effect on the poorest and most marginalized, those unable to move or rebuild. Where the friars live, the roads are a mess and many of the houses are either abandoned or in disrepair.

The problem is that many people do still live there, despite the poverty and crime. Because of this, oddly enough, I see the city as more appealing now than I ever would have in my “previous life.” Even in my college days, debauchery to the scale of Bourbon Street would not have appealed to me; I was utterly disgusted by it. But as a friar, there is a lot, actually, that appeals to me. It is a poor city that needs a lot of physical (and spiritual) help, and a place where many people would be uncomfortable to go. This is the description of a place friars need to be; this is the description of a place where I feel called to be. As friars, we are called to serve the poor, with the poor, as the poor. To me, New Orleans offers quite an opportunity for that.

Unfortunately, you’ll see that there is no video for today. For starters, I was dead tired (and a bit uneasy after our evening downtown). I knew we were leaving this morning at 6:30 and decided to rest rather than work on a video. I got some cool footage of the street performers, so maybe I’ll work on that later to share.

← Getting Through Texas
There Were Some Nice Things Too →

2 Comments on “Opportunity in New Orleans”