The View From the Periphery

Pope Francis’ words reflect a life of go to where the people are, humbly taking on their experiences.

History is one of my favorite subjects. Learning about those who have gone before us, their innovations and mistakes, is one of the most valuable things we can study; realizing that we have the ability to affect history demands that we learn from it. What I love about it is that it is much more that just memorizing facts: history is a profoundly subjective, pluralistic discipline. Like everyday situations, there are any number of distinct and valid perspectives to take into account when understanding the past. Unfortunately, history is often written by the victors, while the dissenting and minority perspectives are forgotten or left unheard. (For example, the predominant view of the 19th century United States is that it was a time of great expansion and adventure on the new frontier, forgetting the genocide and war the Native Americans experienced and the forced Chinese labor that allowed it happen.)

In our own day, as we continue to make history, we are susceptible to the same sort of tunnel vision and selective remembering. We use terms like “Americans” or “most people” to describe something central to the culture as we see it, but is that all that’s there? Often times, I would think, these statements reflect a white, middle-class perspective. This is by no means to devalue that perspective, as it is obviously mine; it is simply to identify it as one perspective, and to ask if there might be any other (even conflicting) perspectives worth hearing. What is the experience of the immigrant? The racial minority? The gay man or woman? The materially impoverished?

I ask these questions and present this post because a man I greatly respect has insisted that we take them seriously. Who, you ask? Our very own Pope Francis. Speaking to the Union of Superiors General of men (heads of religious orders throughout the world), Pope Francis had this to say:

“Truly to understand reality we need to move away from the central position of calmness and peacefulness and direct ourselves to the peripheral areas. Being at the periphery helps to see and to understand better, to analyze reality more correctly, to shun centralism and ideological approaches.
It is not a good strategy to be at the center of a sphere. To understand we ought to move around, to see reality from various viewpoints… Some time of real contact with the poor is necessary… [we] need to become acquainted with reality by experience, to spend time walking on the periphery in order to really become acquainted with the reality and life-experiences of people. If this does not happen we then run the risk of being abstract ideologists or fundamentalists, which is not healthy.” (For full text, click here.)

When I originally read this passage last summer, I knew that it was speaking to me: While I have had a passion for helping the poor and marginalized for many years and believe that I am fairly socially conscious of the world’s issues, I realized that most of my knowledge of these issues was theoretical, not based on actual experiences with people at the margins. (This reflection influenced much of what I wrote shortly thereafter in Not So Minor, the post in which I talked about being a “friar minor” despite being privileged in every way: “I am a young, white, college-educated, middle-class, heterosexual male…”)

Something needed to change. I needed to stretch myself in some way, even if it seemed insignificant to those around me, to feel that I was at least moving towards the periphery. I wanted to see what others see, feel what others felt, even if for just a brief period of time. Two opportunities have presented themselves so far, and I look to add to them next term. 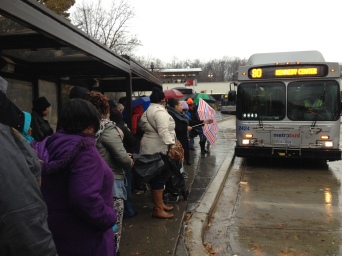 Rain or snow, people have to get where they’re going.

The first came as a further commitment to what I tried last year: take public transit to school. There was something about driving to school in my comfortable car, on my schedule, always warm and dry, that made me feel “fake” when I passed people standing at the bus stop in the rain. What was it like to depend completely on someone else to get somewhere? Was it reliable? Was it comfortable? I decided to commit myself to the experience. Every morning. No matter the weather or how late I was. I stood in the rain. I stood in the snow. I stood in the frigid wind. Why was this important to me? Because that’s what many people do every day. Even when the bus was late, slow or inconvenient, even when the weather was disgusting and uncomfortable, even when there was only room for people to stand, populated by smelly, loud and sometimes crazy people, the bus was always full. Convenience is not a factor when there is only one option.

In the few months so far, it has been a valuable learning experience for me. As I said in Growing in Solidarity, my relationship with the people around me changed from sympathy to empathy as I not only knew their struggles, I began to associate them as my own. What I found was that it is much more than the discomfort of waiting in the cold or being cramped next to smelly people: it’s the stress. When relying on public transit, you are at the mercy of the system, completely inflexible and out of control. Each morning I have to be conscious of the weather and make sure that I am not even one minute late, which means rushing at times. There are many times though, even if I run out of time and run out the door without my lunch, that I’ll show up to the bus stop and have to wait 15 minutes for the late bus. Other times I’ve been on time and had to run a block to make it. This little bit of stress, something I had never thought about before, can have a tremendous impact on the day, effecting my mood the whole hour before and after the trip. This is what many people go through each and every day without question or alternative.

So much of what we take for granted is stifling for immigrants.

My other attempt at moving to the periphery came in my choice of ministry sites this year. Two nights a week, I teach English to non-English speakers at school next door. Being that I have never done this before, I was gifted with the introductory students, those who are just starting to learn a foreign language. This is both a great joy and a great difficulty. On the one hand, there are people in my class that came to this country 5 months ago having little to no knowledge of a single English word. To be their first introduction to a language, and in a sense, the country, is an honor. What they will learn in my class will hopefully be the foundation for the rest of their lives here. And yet, for those who have tried to learn a foreign language, this is an incredibly difficult task to start from scratch, especially when the teacher can string together a few Spanish words and knows absolutely no French. Even asking a question like, “Do you understand?” is an impossible task.

Teaching English has been a profoundly touching, exhausting experience for me. To see students learn and grow right before my eyes is such a wonder; for most of them, their English vocabulary has literally doubled or tripled. But that’s to be expected, I suppose. The formative part for me has really been witnessing the perseverance and courage that most immigrants have. I look out at my class, struggling to communicate with them, and realize how traumatizing this must be for them, every moment of the day. While most live in communities that speak their native language, I don’t think there is anything more infantilizing than not understanding and being forced to speak like a three-year old: “I like banana.” How easy it would be to remain in that tight-knit immigrant community, never learning English, and yet, these men and women show great courage every week to stretch themselves, despite being afraid that I will call on them to speak. What an inspiration.

And really, what a different point of view. It is the view from the periphery, the view forgotten or left unheard. What would history be like if it were written from this perspective? What would our national and international policies be like if we saw the world from this position? It is the great challenge we face as Americans and as Church; it is the challenge that I face as a “friar minor”. To view history only from the center is to forget the thousands, even millions, who do not have such luxury or privilege. It is a call to all of us to see and understand the experiences of those different from us, and dare I say, give a preferential option to the minority voice. That’s what the Church has stressed for decades in regards to the poor (preferential option for the poor) and what Pope Francis is asking us to do for all people. My hope is that this friar life will continue to lead me away from the center so that I may give a voice to the voiceless, and change they way we write history. Want to join? Who knows. You might even like the world a little better from a different perspective.

Again, thank you for reading! If you haven’t already, please share what you think about the blog by taking the two question poll on the last post! (Click here to go there from email.)

← School’s Out!
My Vocation Journey →