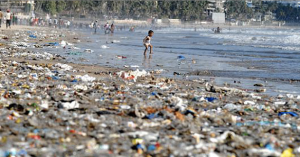 You'd never see a sight like this where the rich live, would you?

When Catholics speak about “justice,” we tend to think about things such as the fair treatment of workers, peace, living wages, freedom from enslavement, etc. The images that come to mind are almost exclusively economic and peace related. For many, ecological justice is a secondary concern.

Attending the RFC Philadelphia region workshop today, we were convinced otherwise. Led by Sister Maria DiBello, RSM, and attended by about 30 men and women in religious formation, the workshop was in part a viewing of a documentary by the Pachamama Alliance called “Awakening the Dreamer.” After watching the documentary and listening to her lecture, it’s impossible to see how ecological justice could ever be overlooked.

One of the reasons that it deserves as much attention as the other forms us justice is that it is intimately related to the well-being of humanity and the protection of the poor. For instance, at one point, a woman on the documentary said something to the effect of, “What does it mean to throw something away? There’s no such thing as away. All we’re doing is displacing our waste to another place.” That place is almost always the home of the poor and oppressed. Pollution in the First World causes the destruction of vital resources for the already poverty-stricken Third World, dangerous water and living conditions, and leaves them highly susceptible to erratic fluctuations in climate. Lack of ecological justice, in the form of overconsumption and waste, hurts more than just the polar bears; it directly effects humanity. For a specific example, take a look at the effect of plastic water bottles.

Though the majority of the day was a reiteration of material I studied in college, I found it all to be a great reminder of the great responsibility we have to protect all of God’s creation, and how our mistreatment of it hurts us more than we think. Often times we find ourselves in the First World becoming complacent and entirely ignorant of the world around us. The truth is, what we do effects others in the world around us. When we look at the dire state of our planet in the long run, as well as the horrific effects it is causing in the present day, we can begin to see the “justice” that is needed in the world.

← A Brother, Even When Busy
Road Trip! →