“And The Lord Gave Me…Cousins?” 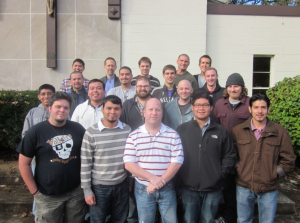 There is a friar in our province that shared with us a bit of playful advice prior to traveling to Cincinnati and meeting the other postulants: “Just remember, the guys from your own province are your brothers. The ones from the other provinces are just your cousins… you don’t have to love them as much.” Even typing here in the room, by myself, I find myself laughing out loud.

Though this friar was [mostly] kidding, this sort of statement is clearly a sentiment held historically among the provinces. Almost every American province was founded independent of one another, and because they were originally organized based on language and culture, not geography, there was little cooperation even between different friars living in the same city. Over time, each province began to develop a distinct personality, each of which was Franciscan, but each of which was unique to each other. Even today, despite losing the majority of our cultural ties, there is still a distinct philosophy to each province that is evident in the way new members are formed, which ministries are emphasized, and so on. They’re part of the same family, but probably don’t have the same parents as us.

To say that I didn’t notice these differences, even in a short week, would be a lie. After meeting 15 different guys from four other provinces and hearing about their experiences in the past two months, the friars they know, the ministries they offer, and their plans for formation, I can see very clearly a difference in culture. But to say that we are all fundamentally different, enough so to reserve for each other the title of “cousin” rather than brother, is simply nonsense. The existence of workshops like these and an inter-provincial Novitiate next year says to me that the leaders of each province think the same.

All-in-all, I found this week to be a great experience in community building. I found the differences based on province, as well as different individual personalities, to be both challenging and enriching. I met people that I’m very exited to get to know better and live with; I met people that I could not stand to be near and dread the idea of living with them. In both cases though, I had to remind myself that brotherhood is not about being best friends or hanging out with like it’s a freshman dorm: it’s about upholding one another in faith and sacrifice, mutually existing for the sake of the Gospel.

When Francis famously wrote, “And the Lord gave me brothers,” I can imagine him with great elation, overjoyed with the joy of such a gift. I can also imagine him saying it with a bit of sarcasm, wondering why his life was burdened with such annoying men all around him. I imagine he spoke from both perspectives throughout his life as a brother. In the end, though, he never said, “And the Lord gave me cousins.” They were all his brothers, as all of these men will be mine.

5 Comments on ““And The Lord Gave Me…Cousins?””